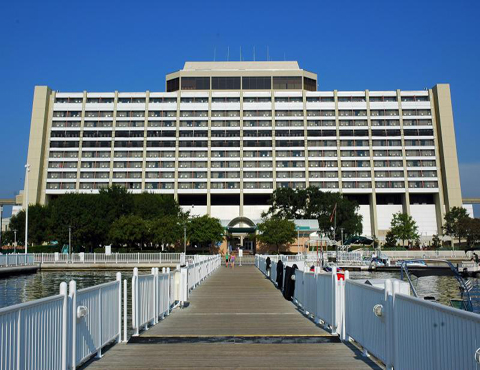 Great location next to Disney’s Magic Kingdom. Best location at DisneyWorld especially during the high season, you can walk to and from the resort to the Magic Kingdom avoiding long lines at the monorail, bus and boat transportation. California Grill is a “must do” dining experience where you might witness a child press the button to start the fireworks over the Magic Kingdom. The view is also incredible and a “must see”. There are Club Level Rooms on the 12th and 14th floor. The 14th floor has the 1 and 2 bedroom suites with higher end decor throughout. The Club Level Lounges over look the Magic Kingdom with nice offerings throughout the day.

Disney’s Contemporary Resort, originally to be named Tempo Bay Hotel and previously the Contemporary Resort Hotel, is a AAA Four-Diamond Award–winning resort located at the Walt Disney World Resort in Bay Lake, Florida. It opened on October 1, 1971. It is one of two original properties located at the complex alongside Disney’s Polynesian Village Resort, and is currently listed as a deluxe-priced resort.

The Contemporary Resort is one of two resorts located on property when Walt Disney World opened in 1971.

The Contemporary Tower, the most prominent of the resort’s four stand-alone buildings, was built as an A-frame with outer walls which slope inwards around an inner atrium. This design was a collaboration by Disney, the United States Steel Corporation, and Los Angeles architect Welton Becket. To construct the building, steel frames were erected on-site and modular pre-constructed rooms, designed by California architect Donald Wexler, were lifted into place by crane. Most of Disney’s Polynesian Village Resort and the Court of Flags Resort were built the same way, except rooms were stacked instead of slid in.

In 2006, Disney filed plans for a project on the site of the Contemporary Resort’s North Garden Wing. Bay Lake Tower ultimately contained 281 timeshare units. In preparation for the future sale, Disney incorporated a condominium association for the property on January 9, 2007 that would manage the units. The project was officially unveiled on September 16, 2008.Timeshares began on September 28, 2008 to existing Disney Vacation Club members and on October 5, 2008 for new members.

In 2005, Disney began an extensive renovation of Disney’s Contemporary Resort, and it was completed in 2009. As part of the major construction at the Contemporary Resort, the north wing of the hotel was demolished to make way for a separate Disney Vacation Club resort at the Contemporary complex that opened in 2009. At the same time, the Bay Lake Tower began construction. Disney’s Racquet Club was demolished by January 30, 2007, while the North Wing itself was demolished between January 31 and April 6, 2007. Construction on the new building continued through 2007, without Disney officially announcing what was actually being built. The Bay Lake Tower opened in 2009.

On November 17, 1973, the Contemporary was the site of what would become one of the most famous press conferences in American politics, where President Richard Nixon declared “I’m not a crook”. Nixon was seventeen months into the Watergate scandal and coming back from a trip to his Key Biscayne home. Stopping at the Contemporary, which was hosting the 1973 Annual Convention of the Associated Press Managing Editors Association, the president held a live one-hour televised press conference in the Ballroom of the Americas. Following an earlier question by Joe Ungaro on Nixon’s taxes, Nixon decided to address claims that he profited from his public service, stating “I have earned every cent. And in all of my years of public life I have never obstructed justice… People have got to know whether or not their President is a crook. Well, I’m not a crook. I’ve earned everything I’ve got.” Nixon resigned from the presidency less than a year later, on August 8, 1974, after the “smoking gun” tape was revealed on August 5, 1974.

The Contemporary Tower houses most of the resort’s key facilities, including resort registration and the guest service concierge. The main hall, named the Grand Canyon Concourse, is located in the main tower and houses restaurants and shops. 383 guest rooms line the outer walls of the Contemporary Tower. The Walt Disney World Monorail System runs through the inside of this building and a monorail station is located here for resort guests. Adorning the concourse walls is a multi-story mosaic designed by Mary Blair. One three-story wing flanks the south side of the tower and houses an additional 250 rooms. A convention center was added to the resort and opened on November 11, 1991, with more than 90,000 square feet (8,400 m2) of convention space.